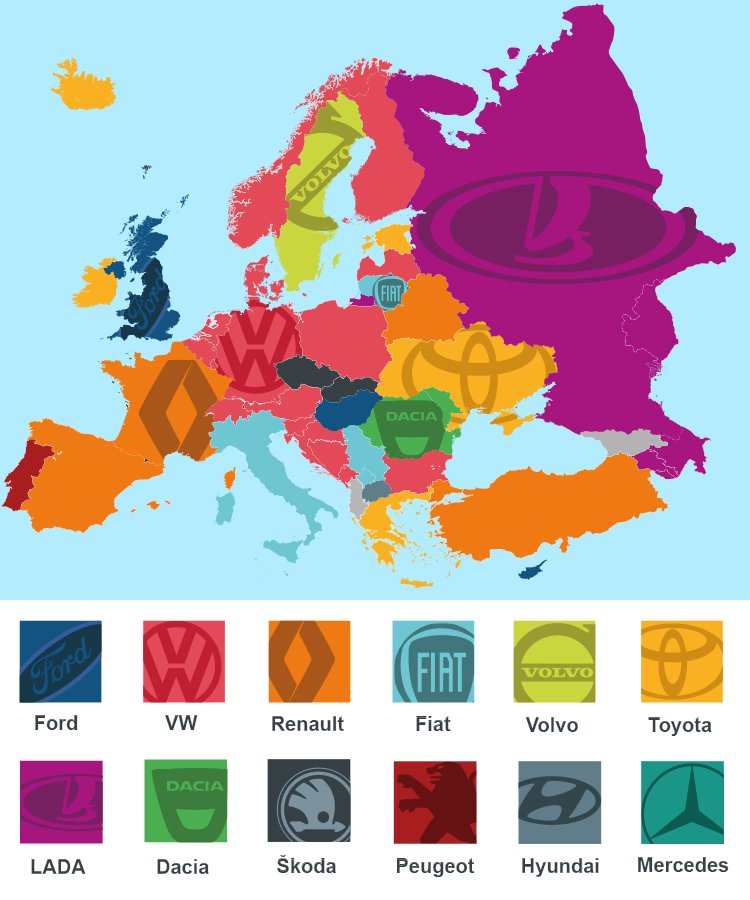 Research carried out by InsuretheGap, using data from Marklines, looked at 45 countries in Europe and found that VW was the most popular in 17 different nations in 2016, as highlighted in our map below:

Renault came in second place, with the French manufacturer selling the highest number of new models in its home country – 408,000. Neighbouring Spain (90,000) and Belgium (56,000), as well as Turkey (106,000) and Belarus (8,000), ensured that Renault was the most popular brand in five different countries and took the total sold across those markets to more than 660,000.

As with both German VW and French Renault drivers, many customers remain loyal to homegrown brands. Fiat is the most popular brand in Italy (374,000), while Volvo remains the manufacturer of choice in Sweden (71,000). Meanwhile, LADA is by far the most popular new car sold in Russia, with 266,000 sold in 2016, while it also takes the top spot in neighbouring Kazakhstan, Armenia and Azerbaijan.

The statistics are a departure from global trends, where Japanese brands largely dominate; Toyota is the most popular manufacturer in the US, Australia and Japan, Honda leads the way in Canada and Singapore, while Nissan is most popular in Mexico and the UAE.

The key exception is China, where VW sold over 2,700,000 new vehicles in 2016, helping the VW Group to take the global lead with 10.3 million new vehicles sold across the year, compared with 10.2 million Toyotas.

The picture of the European car market has remained largely the same over the past ten years, with Germany (VW), France (Renault), Italy (Fiat) and the UK (Ford) all remaining loyal to their most popular manufacturers.

However, the numbers being sold vary significantly. Although VW sales in Germany have increased since 2007, sales of the most popular vehicle in the UK, Italy and France have all fallen. The sharpest fall was observed in Italy, where Fiat has fallen from 602,000 annual sales to 374,000 since 2007.

As VW and Renault continue to do battle to become the continent’s most popular manufacturer, it remains to be seen what the European – and global – new car market will look like in ten years’ time. As electric cars rise in popularity, we may even see a new contender emerge.

InsuretheGap.com are calling all students who think they’ve got what it takes to design a logo for a soon-to-be-launched bicycle insurance brand.

One in five millennials pay as much for their car each month as their rent or mortgage, according to a new Opinium survey